“Beer festivals are a dime a dozen, but there are none like this. Big Beers is much more than a beer fest. Spanning three days, brewers and beer geeks fill Beaver Run’s various convention rooms for panels that combine the artistic and scientific sides of the brewing game.”

“Everyone brings killer beers. The pour lists are incredible and there is so little wait time on some of the most amazing beers in the world. Here in Breckenridge, the atmosphere is great with a sense of educational seminars, pairing events. There is an air of intentionality and innovation. It is a special place.”

“We get a lot of invitations to events and festivals around the world and some of our biggest criteria is “Is it well curated? Are there people there that share our philosophy about beer?” This festival is both of those things. Laura and the organizers put a lot of thought into who they want to be here and it’s a lot of high-quality beer and high-quality people.”

“While beer festivals have multiplied to point of mainstream adoption, the truly elite continue to thrive and stand tall above the rest. There may be no festival that stands taller than Big Beers Belgians and Barleywines. Each year the showcase of rare, high gravity beers grows in stature, and each year we’re left in greater awe at the quality of beer being produced in the industry.”

“Colorado’s best beer festival is one you’re probably missing. The event has gained a reputation in the industry as one of the best beer festivals in Colorado and is becoming the place where local breweries flex the hardest.”

“It’s easy to see why Big Beers has earned a place on USA Today’s 10 Best Beer Festivals list two years in a row.”

“The collection of brewers [at Big Beers] is one of the best in the world.”

“My first Big Beers experience occurred last year, after which I knew I’d be returning for as many years as time and money would allow. It’s just that good.”

“…Big Beers has come to capture the essence of what it takes to throw the ultimate beer lover’s festival, ranging from a star-studded cast of brewers, to an elite level lineup of beers, intimate brewers dinners, premier educational seminars, and world-class skiing all to the backdrop of some of the world’s most stunning mountain vistas.” 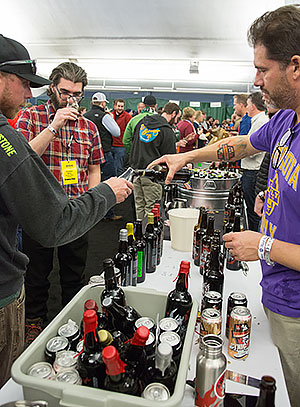 “Big Beers Fest is “the Sundance” of beer festivals . . . this [festival] is one of the special ones [with a lot of] connectivity and camaraderie. This week provides an opportunity for people [of the craft beer industry] to push pause . . . and connect with each other, with colleagues and take a load off.”

“The camaraderie brings me back here – you can see if you look down the row [gestures to the adjacent booths] Adam Avery is here pouring his own beer, Tomme Arthur from Lost Abbey’s here pouring his, so all the brewers are actually here behind the booths and you get to meet the people who make the beers that we love.

I also like meeting with my friends who are brewers, getting to ski is huge and the scale is not too big so the crowd isn’t insane, and the beer IQ of the crowd is very high compared to your average beer fest.”

“…the 2016 Vail Big Beers, Belgians and Barleywines festival once again reestablished its place as the benchmark of what all other beer festivals strive to be.”

“The Big Beers, Belgians and Barleywines Festival — now in Breckenridge — is indispensable for me as a beer writer, and a blast as a beer lover. I think that it helps set the tone for the year in terms of what beers and breweries are going to make waves. It is a chance to talk to beery movers and shakers about their opinions. And did I mention that it is an absolute blast?“

“I think that this is one of the most fine festivals for beer on the planet earth.”

“Easily the best beer festival on the planet!” @BigBeersFest pic.twitter.com/dy5AxYKHFm

“We get to come out here and try a lot of different beers that we haven’t sampled before. Most of what we brought are very, very small production, barrel aged beers so they’re really not accessible anywhere other than the brewery, so it’s fun to see people’s reaction.”

“Honestly, I don’t want to tell you anything about the Vail Big Beers Belgians and Barleywine Festival, but I must. I’d prefer not to list breweries who were in attendance, the beer celebrities who were milling around the grounds, and I especially would rather not divulge the amazing bounty of beers that was poured.

Why? Because I’m selfish and I just attended one of the best damn beer fests that I’ve yet to come across and I don’t want you overpopulating it in the future. If you ever find yourself ready to graduate to the truly obsessive level of beer tasting, this is certainly the event to be in the know about.”

“The Big Beers, Belgians & Barleywines Festival is one killer beer festival. It is perhaps the most comprehensive, educational, and fun-filled festival I’ve ever been to and the most exciting four hours of beer tasting I’ve ever done!”

– Eric Steen, Focus on the Beer “So here’s the prescription: Take a couple of hundred beers, most 7% alcohol or greater with hardly a dud in the lot, add not one but two beer dinners, mix in a handful of seminars and tastings, and season with some of the best craft brewers in the land.

Put it all in an idyllic mountain setting and offer some of the lowest hotel prices and shortest tow lines Vail will see all season, and you have the fest in a fairly compelling nutshell.”

“I highly recommend this festival. There are seminars, beer dinners, a homebrew contest and a grand tasting session of over 200 different beers!”

“If you somehow got burned out on sampling the cornucopia of American beers, you could always re-ignite the flame for your love of authentic Trappist Ales (Rochefort, Westmalle, etc.). Not too many festivals include these true Belgian beauties, but including them helped us remember and appreciate those Belgian styles we all love and all too often overlook.”

“(Big Beers, Belgians & Barleywines) has become my favorite fest of the year. True camaraderie paired with a high level of brewing knowledge in a relaxed setting.”

“I think this festival is a really important festival for Colorado… There are very few festivals where you can have the diversity of beers that Bill puts together.” “(We) have made some friends that we see each year at this event and we look forward to it each year. For us, this festival combines snowboarding, fantastic beer, a beautiful setting, and great friends…it doesn’t get much better!”

“Vail Big Beers, Belgians and Barleywine blows our minds each year and continues to be one of the best in the land.”

“Often regarded by industry pros as one of the most diverse and well-produced beer festivals in the nation, Vail Big Beers’ Commercial Tasting was anything but commercial in style. Rather, the tasting was a vibrant tapestry of brewers, big and small, bringing their A-game with a heterogeneous line-up of unique and rare brews.”

“The Big Beers Fest in Vail is always one of my favorite events of the year. It sells out quick and it rules.”

“This is one killer beer festival. I look forward to it now every year, and it continues to be my very favoritist beer festival.”

– Eric Steen, Focus on the Beer

“It was refreshing, and I hope other Brewers were taking notes, to hear Adam talk about high-alcohol brewing as a way to create flavors that age gracefully rather than a bullet train to drunkenness.” (Referring to the “High Alcohol Brewing” seminar with Adam Avery and Sam Calagione).

“It’s one of the best festivals in the country. The sheer diversity and availability of such exotic beer styles all in one location really gives the consumer a great opportunity. Plus it’s got a nice educational component that Bill Lodge has dreamed up, which encourages people to try different styles and not just stick to one thing.”

“It was born out of a great ideal of pushing flavorful beers without worrying about whether they’re across the pond or from here — and big obviously, and flavor.”

“Hot tubbing with other men with beer bellies is something that happens a lot at this fest [laughs], we’re not afraid to make a little ‘man soup’ while we drink each other’s beers and talk about how the industry’s evolved in our two decades of being in it!”

“Big Beers is like a family reunion, with all the brewers present.”

“I’ve never understood why a festival that promotes 10 percent-plus alcohol beers at 10,000 feet, how that makes sense. But somehow it does.”